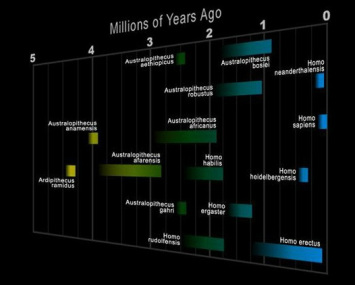 We have all seen the image of evolution: several ape-like creatures lined up, each one marginally more advanced until the last animal - Homo sapiens. Humans as we know ourselves. What is often misunderstood, is that there were actually many ape-like creatures that existed before, alongside, or developed from, our own ancestors. Not all of these animals developed further, some even went extinct. For instance, Homo neanderthalensis actually existed at the same time as our Homo sapien ancestors. We did not evolve from Neanderthals as commonly believed. A succinct article on the timeline of human evolution can be found here.

Science is often discovering new animals that may or may not be part of our lineage. For instance, in April 2013, it was reported that a new species, Australopithecus sedbia, was found in the cradle of life not far from Johannesburg.

We are confined to a fossil record which is patchy at best, reliant on the right conditions to preserve each and every specimen that we subsequently discover through tireless excavation of sites that interest us. It is entirely possible that we have missed something along the way. Something very important. Something that evolved alongside us, from a common ancestor.

While I cannot claim to express the entirety of human history in a few paragraphs, conceptually it is accepted that:

Thus, it is accepted that somehow in a short space of time after the bronze age, the human race was able to create some of the most complex structures on Earth, on different continents. These structures are difficult to construct with today's technology.
Hapgood concluded that advanced cartographic knowledge appears on the Piri Reis map and the Oronteus Finaeus map, and must be the result of some unknown ancient civilization that developed advanced scientific knowledge before other civilizations such as Greece. The knowledge would have been available before 10,000 BC. While Hapgood's work garnered some enthusiasm, his hypotheses largely met with skepticism and were ignored by the majority of scholars.
It has long been debated that a device of such complexity could not have been just thought up and built in the space of a year, or even ten years. Understanding the paths of the sun, moon and planets would take hundreds if not thousands of years of recording, with advanced techniques – particularly to establish the elliptical orbits. It suggests that there was prior knowledge. Ancient knowledge, passed down to, or copied by, the Greeks.
Far away in Mexico, we find more pyramids. This is significant in itself. Even if 'normal' chronology is accepted, communication between these two continents would not have been possible. Why build such similar objects?

Northeast of Mexico City stands the ancient site of Teotihuacan, the largest city in Mesoamerica during Pre-Columbian times. It should not be confused with Tiahuanaco, described below. Orthodox archaeologists are divided concerning the date of the site; some believe it was at its height from 1,500 to 1,000 BC, while others think a period of 100 BC to 700 AD is more probable.

However, an increasing number of scholars suggest that Teotihuacan may be far older than previously assumed.  One reason for this is the fact that its current name - Teotihuacan (‘the place of the gods’) - was given to it by the Aztecs long after its decline and eventual abandonment. The site is also mentioned, with equal mystery, by the Mayans, Zapotecs and Toltecs. In Fingerprints of the Gods, Graham Hancock discusses other archaeological anomalies of the site and suggests that certain structures and alignments within the city may actually date far back into antiquity.

One such structure is the formidable Pyramid of the Sun. Until relatively recently (i.e. early 1900s), the entire top level of this pyramid was covered in a massive, one-foot thick, sheet of granulated mica. The mica been transported from a mine thousands of miles away in South America. How had the great quantity of mica been brought from such a distance and, equally important, for what purpose? Several theories have been put forward, including absorption of celestial radiation at specific times of the year.

The site at Teotihuacan, including the Pyramid of the Sun
In his book, Fingerprints of the Gods, Graham Hancock suggests that Tiahuanaco was originally built as a port on the shore of lake Titicaca. Indeed, much smaller now than in the distant past - having receded by almost 20 km -  Lake Titicaca is often referred to as the highest navigable lake in the world; it sits 3,812 metres above sea level. What is stranger, is that the inland waterway is littered with millions of fossilised seashells. The lake also features a range of marine as opposed to freshwater fauna. Creatures brought to the surface in fishermen's nets have included seahorses. This is suggestive of a massive and relatively rapid elevation of the entire lake in antiquity. Graham claims that the remains of vast harbour constructions, piers and dykes have been found at the site. Moreover, he reports evidence from Professor Posnansky that suggests this port would have been active as early as 15,000 BC. This researcher also argues that a terrible flood had destroyed the port in the 11th millennium BC.

In ancient times, the area of Tiahuanacan was said to be inhabited by the Viracochas, an advanced civilisation, capable of fantastic technological feats. There has been some evidence to suggest that after the cataclysmic flood, someone - perhaps the Viracochas - built raised fields and agricultural systems utilising the newly exposed lands. Some investigators suggest that these agricultural systems could even outperform modern techniques.

One last interesting piece of the puzzle is the language spoken by the local people of Tiahuanaco: Aymara. This language, possibly one of the oldest in the world, was shown by Ivan Guzman de Rojas to be almost designed. Ivan showed that the rigidity and strange syntax of the language meant that it could be transformed into a computer algorithm and used to translate one language into another.
In Mesopotamian myths, strange amphibious beings are described that were endowed with reason. These beings, led by one named Oannes, visited the land of Sumer. Most surviving imagery of Oannes and his race show fish-garbed men. Though, the original description would not lend itself to such an image. Indeed, Oannes was described as an animal that was sentient and possessed the power of reason. He was said to converse with the people during the day, bestowing knowledge of science and art, but would return to the water at night because he was amphibious.
The fourth veil: Certain individuals will discover the Illuminati, Freemasons, and other secret societies. These societies use symbols and perform ceremonies that perpetuate the generational transfers of arcane knowledge that is used to keep the ordinary people in political, economic and spiritual bondage to the oldest bloodlines on earth.
The fifth veil: Some learn that the secret societies are so far advanced technologically that time travel and interstellar communications have no boundaries and controlling the very thoughts and even the very actions of people is what their members do as offhandedly as we tell our children when they must go to bed.

The sixth veil: Here, we learn the dragons and lizards and aliens we thought were the fictional monsters of childhood literature are real indeed and are in reality the actual controlling forces behind the secret societies uncovered in the fourth veil. [Serpent like beings have played a large role in human regions, from South America to Iraq (see left and refer to Quetzalcoatl above)].

The seventh veil: The incredible world of fractal geometry and the universal law of numbers will be fully understood and embraced.  The creative force of the entire universe will be shown to be linked to numerical code formulas and sequences, and all “mysteries” including the very fabric of time, space, parallel universes, and access therein is unlocked.  Those whose intellects allow them to pierce the seventh veil often succumb to the lure and promise of massive wealth offered by the ruling elite.

The eighth veil: Piercing the eighth veil reveals God and the pure energy known as LOVE that is the pure life force in all living things – which are one and the same.  Deep-seated Humility is needed in order to ever pierce this veil.

The ninth veil: Piercing the ninth veil means perfecting the pure energy known as love and thereby becoming truly one with God and His formulations.  By perfecting this pure energy, one then fully embraces charity and therein gains full understanding of the universal plan of sacrifice, death, and redemption; life itself then becomes complete and one truly comes full circle and looks at the world through the eyes of an innocent child, yet with the deepest wisdom born of pure LOVE from the eighth veil.

A Grain of Truth?

Given the snippets of information above, and strange continuity of ideas and imagery across both the globe and time, isn't it possible that humans were not, perhaps even are not, the most advanced species on Earth? A time period of around 10,000 BC crops up numerous times for various technologically advanced creations (monuments, maps, docks), yet this in itself suggests a far older chronology for whatever race created them. Could this ancient and intelligent race have intervened at a point in human history, jolting our advancement?  Providing a quantum leap forward? What if this were the case? What if, as the nine veils theory suggests, the world's powers already knew...?